I’ll make this a short post since it’s gone midnight and I should be working on this weeks homework.

So last week we learned about character design by manipulating anatomy. The anatomy still had to be accurate as far as muscle structures go but the goal was to stretch or squash or build up or slim down various parts to make a unique character. I’ll tell you now, I did not do well at this assignment. 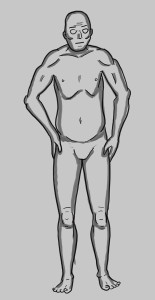 First of all, drawing girls is hard. The first one I drew had all the muscle groups (as I understood them) bulging out like on the guy. It did not seem feminine. Which is weird, right? Girls have muscles. My wife is in way better shape than I am and she looks crazy feminine. I’ll have to practice that more.

Anyway! The anatomy on both the men’s shoulders and the muscle mans legs are way off. I made the mistake of using a “How to draw superheroes guide” while doing them. Tom, my teacher, advises against that because it’s “reinterpreting someone elses reinterpretation of anatomy” and he’s exactly right. Now I’m using actual photographs for reference.

Now the manipulated ones! 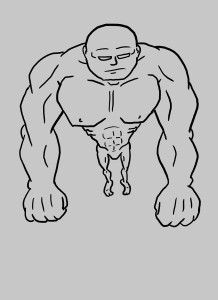 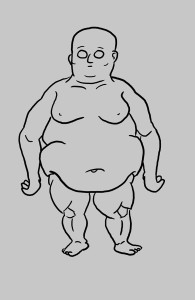 Tom said he actually liked the huge muscle guy which is cool but major issues with the biceps and shoulders. For one thing, I thought the biceps were like a big square muscle where the boobs go. Nope. More of a triangle but it appears square because of the shoulder anatomy overtop. And I would know that if I used real life references instead of drawings! Arg I’m so mad at myself. The skinny guy has too many issues to even get into. And the fat guy has girl boobs. Did you know that mens fat looks different than girls fat on the chest? Yup. Sorta wraps around. Blegh.

Overall I got 72% on the assignment. (There was more stuff with volume and 3D boxes tumbling through space. Boring stuff even for the blog but I did well on that). But 72% is my lowest mark yet. I’m not letting it get me down. The next blog post will explain what I’m doing to fix this.