Remember in the last post I said I would explain what I’m doing to fix my human anatomy struggles? Here’s where I do that thing I said.

I have vowed not to get a mark as low as my last one ever again. So I started practicing torso’s. 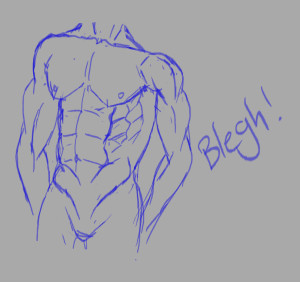 And it took me bleedin’ forever to draw it too. I realized that I don’t have a clear enough understanding of the structures under the muscles to begin placing them in the right spots. I started drawing a skeleton:

I started to get it. I found a muscle diagram and began tracing the muscle groups. Once I had done that a couple times I thought I was ready to draw a torso. It’s right there on the right. …it’s awful.

The anatomy is there but it’s all wonky. I realized then that I don’t have a good understanding of gestures either! I’m right at the beginning! So I watched 4 tutorial videos about gestures and after a while I think I started to get it. 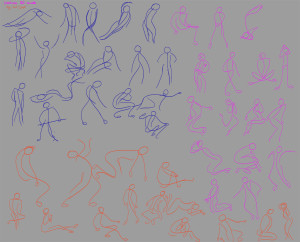 30 second gesture drawings. I know they aren’t perfect but they are easily the best gestures I’ve ever done. I’m going to keep practicing these for a few days (between homework assignments) and then move onto blocking shapes. Wish me luck.