So. Week 8. That was a fun week actually. It was all about skulls, hands and feet. I’m not good at skulls, hands or feet. I tried to really ace this assignment. I spent hours and hours (usually in the middle of the night) on each part. First the skulls: 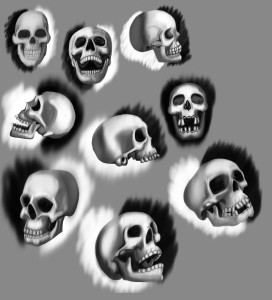 Cool, right? I even rendered them. There are a lot of little errors and mistakes across the board but for the most part I’m pretty dang pleased with myself. This seemed like a daunting task when I started and now I feel like I could do it again in half the time. 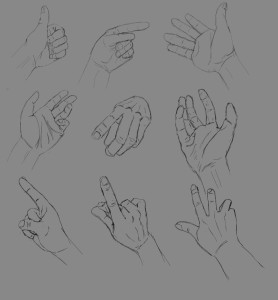 Sorry about the dark backgrounds all the time. I drawing directly on white. It’s so harsh on the eyes. Especially since most of my drawing is done at 2am after the baby has gone to sleep. Anyway you can see they are a little rough. I have a problem with drawing 3 or more lines for each line. Some people choose to draw that way because it gives the image texture and depth. It can be a good way to show implied shadow as well. But for a concept artist its a bad habit. If a 3D modeler was to render an image I drew, he has to be completely certain where the line is.

I did a little bit better on the feet: 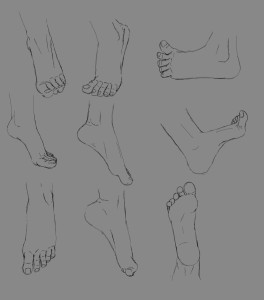 Look how clean those are. The feet were easily the fastest part of the assignment. My teacher, Tom Jung (I’ll make a post specifically about him and how he teaches the class soon), says feet for him are the hardest. You wouldn’t know it though because I specifically used his technique to draw it. He said “Draw a wedge and then a block and make it a foot” and really really simplified it. And that’s exactly what I did. Good job, Tom. That’s some dang good teaching.

Overall I got 80% on the assignment. I really hoped to get more since I put so much effort into it. I’ve gotten higher marks for other classes that took a fraction of the time. But for the faces it’s clear I had some issues with perspective so I can’t argue that it needs work. I’ve yet to get a 90% mark so that’s my current goal. I’m doing Week 10’s assignment now. Perhaps this is my week?!