It’s 2am Sunday morning and I’m still working on my assignment. I worked on it the last 3 days. Here’s why I’m an idiot:

I HAVEN’T STARTED THE ACTUAL ASSIGNMENT YET! Why do I do this???

All I have to do is render a character. Just a black and white image that shows where shadows are and where highlights are. I could easily have done my paranoid book guy from the last assignment but nooooo. I had a new idea for a new character. And I wanted to do it official like, too. Really use what I’m learning.

The premise? A guy cursed to forever play the Violin! Aww yeah. That’s new…ish, right? It’s basically my take on the Faustian myth. Think Robert Johnson but with a violin instead of a guitar. 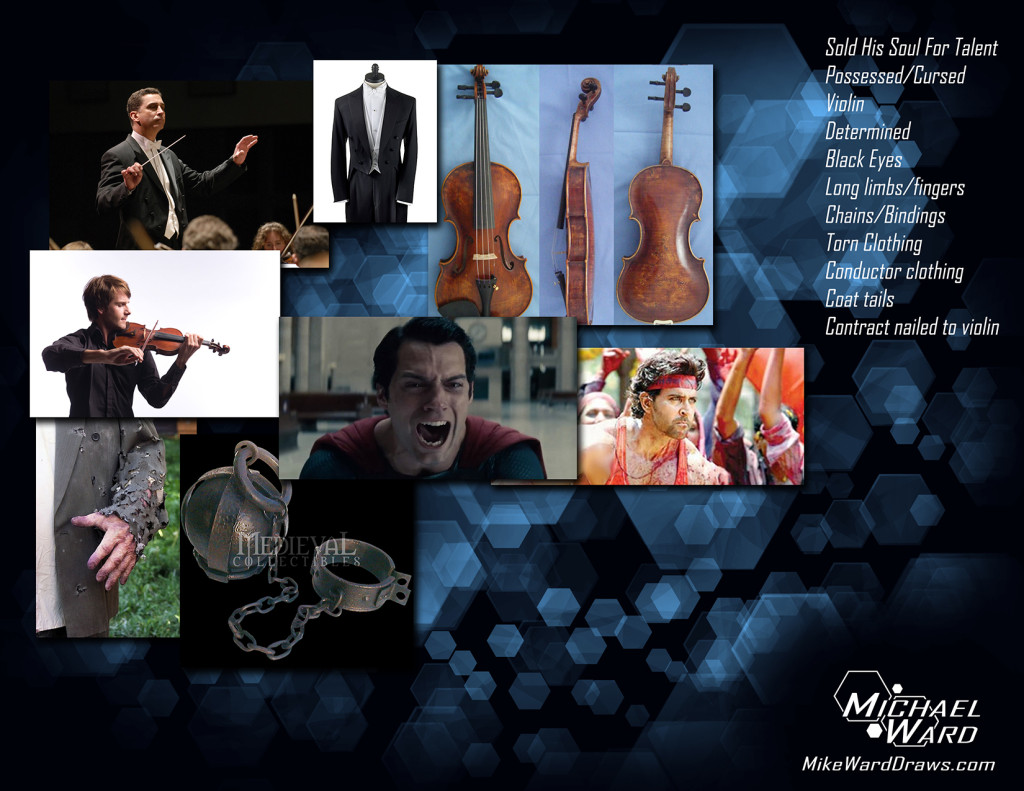 All the real important stuff is there. Clothes. Violin. Look of tortured anguish. Another violin. Truthfully while doing the drawing I used even more reference images but just with google images on my other monitor.

The silhouettes and choosing a pose.

I have a bad habit of erasing stuff that doesn’t work right away. I’m trying to stop that. Anyway here you can see where I tried different poses with stick drawings and different anguished faces. The silhouettes are straight forward. I knew he was dressed like a conductor and he had a violin. I just needed enough drama to look like he’s miserable. I decided on the last one because it’s the most open.

And now the three steps towards a finished drawing:

I actually don’t hate the naked guy! It’s my first ‘anatomical’ drawing that wasn’t garbage. Granted I didn’t draw many of the muscles but you know they are there. Next I dressed him. I’m not sure there are vests with coat tails truly but I thought it looked cool.

The final step, of course, was cursing him up real nice. He’s chained to both the violin and the bow. Clothes are wearing out because he cannot stop playing. He wished to be able to play the violin. Now it’s all he can do. I guess moths or something are eating the clothes off him too. I originally wanted a contract nailed to the violin but it covered up too many details so I scrapped it. Did you see those chains?! They actually didn’t take long to draw. I could have drawn more, even. It’s fun.

SOOOOO I guess I’ll get back to work. Rendering time! Wish me luck. I hope I don’t ruin it.

P.S. Did I mention I have to render a cityscape this week too? And my plan for that is just as convoluted? I’m the worst.