Well Diary,
I’m stumped. I don’t know what video game to make. It’s not that I can’t think of an idea, either. I have TONS of ideas. And I’ve been working on them. Ok let me start over:

A few months ago when I decided to make a video game I had 3 or 4 pretty decent ideas for what it could be. However I had never programmed anything in my life. But the start of any project like this happens on paper anyway so I just wrote all my ideas down. My goal is not just to create one video game. I want a lifetime of video games behind me. So it all went into the notebook.

I sorted all my games from easiest to make to hardest. Keeping in mind that I really didn’t know much about programming so it was really guess work. I started work on the easiest game. It was going to be the game I used to learn programming as well as everything else that goes into making a game company (PR, publishing, testing, etc). And hopefully help bankroll the second game. Let’s call the first one Game Apple (since I’ve no idea what I’m naming it). 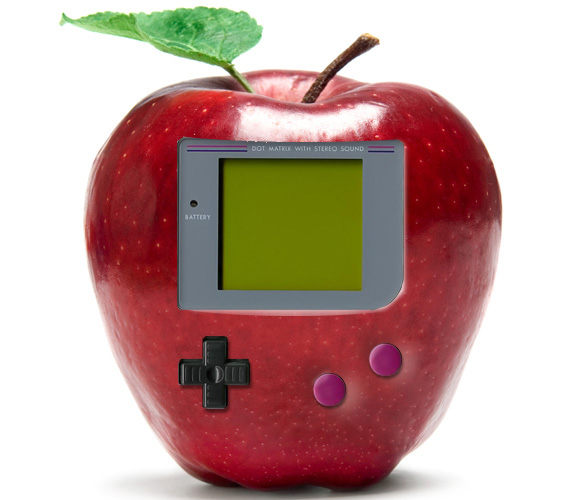 (Yes I photoshopped a gameboy apple just for this post. I hate posts that don’t have any pictures and it’s all I could think of. No I’m not making fruit based electronics).

Game Apple is a game that I’m excited to make because of a fairly unique (in my opinion) twist on a common mechanic and for the story/environment. But I worry a little about it being commercially viable. I ‘believe’ there will be an audience for it. But like all creators I hope my creation will be loved by millions. But years of posting art online shows me that an audience is hard to grow.

The hardest game on my list, Game Banana, is large and the story and mechanics seemed complex BUT I believe it will have a larger audience. A MUCH larger audience. Assuming it’s done correctly, that is. The game I have in my head may be too hard for me to make.

But as I worked on Game Apple I started to understand more and more about the programming language as well as conventions like functions and arrays that can really speed up complicated blocks of code. The more I’m learning the more I’m realizing that Game Banana may not be as impossible as it seemed. Yes, it will be harder. And yes I’m very early in my ‘career’ and I may still not know what I’m talking about. But I’m confident that I could ‘start’ Game Banana now.

The more I learn while making Game Apple the more I day dream about what Game Banana could be and I wonder… am I working on the right game? Do I truly need to spend a year working on a game I’m less confident in before starting a game that could start my company?

This is something I’ve been struggling with internally for months. Sometimes I’ll stare at the wall unknowingly just to have Becky (my wife) ask me what’s wrong. We usually laugh when I respond with “oh. video game stuff.” in my saddest voice.

I think I’ve come up with an answer however:

I Need To Work on Game APPLE. Game Apple ‘should’ be much easier to make. Meaning I will be able to spend more time learning how to do all the other things related to making a video game aside from programming and art. I want to make professional quality games and I’m going to make Game Apple the best game it can possibly be.

I always say “I’d rather be on the first rung of a ladder I want to climb than the top of a ladder I don’t want to be on.” This was the analogy my mom and I used when I decided to change careers into Video Game Concept Art after spending my entire adult life doing something else. Maybe I shouldn’t consider Game Apple and Game Banana two different ladders. Maybe I should stop writing and get to work.

2 thoughts on “Am I Working On The Right Game?”