A paintover, for the uninitiated, is a technique of taking a photograph or 3D model and PAINTing OVER top of it. See how that works? Sounds like the easiest thing in the world, right?

I can’t do it! The assignment was to take an exterior photo and make it all differenty. By the end of the picture you have very little of the photo (if any) visible but you use the perspective and structure as a guide.

I started with a photo. This photo. 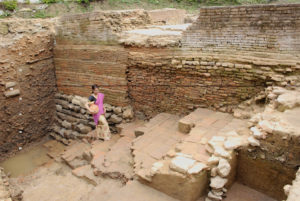 I wanted to make deep ruins using the steps as giant slabs of stone. And I wanted a monster skeleton smashed inside that the original temple was built around. I thumbnailed a million sketches. I started over completely dozens of times.

I settled on this design simply because I ran out of time.

You can see how I changed the scale of the image by putting lots of people inside all tiny. Then I created the line art.

Filling in the image did not fair much better.

Also keep in mind that this was already 2 weeks late at this point. I was trying to save time but throwing down textures and blending them together. Every step of this was a bad idea.

This is the final image I handed in:

I made it so dark to hide how bad it is. This is the worst image I handed in during this program. In fact, this is the first time anyone has seen it besides my teacher. I didn’t put it on any social media even though I try to post my art on Twitter, Instagram and Facebook.

But the point of this blog is address my abilities properly. And clearly I could have used a hard slap of perspective while I was creating this.